What you can’t see can hurt you... Some of the legacy methods of fuel analysis tells a story, but it may not be the complete story. The HIAC PODS+ Particle Counter can give you an accurate measurement of particle contamination and now has the capability of detecting moisture as well. Do you want to know if your fuels has both water and contamination? Then see how the new HIAC PODS+ tells the whole story.

In 1963 the US Air Force publicly announced that contaminated jet fuel caused engine flame outs, fuel gauge malfunctions, internal tank corrosion and other fuel system difficulties(3). Donald Brooks, then Chief of the Fuels and Lubricants Division (1963), investigated and authored “Military Research on Jet Fuel Contamination”. He concluded that improper operation and maintenance of fuel handling equipment was found to be the main factor of serious fuel contamination(3).

Any fuel handling expert will tell you that the fuel coming out of a spout at the refinery will be the cleanest that fuel will ever be. As the fuel makes its way to a gas tank from the refinery it will move through multiple containers, be exposed to moisture, and become susceptible to dirty air(4). The standard method of testing fuel contamination is a procedure where the human eye is responsible for detecting cleanliness(9).

There are two problems associated with fuel contamination. 1) Fuel will get contaminated, it’s inevitable and it could lead to unplanned downtime, can put human safety at risk and it causes costly breakdowns. 2) Fuel cleanliness test methods are subjective because they require the use of the human eye to determine fuel cleanliness levels. Unique features of the new HIAC PODS+ provide solutions for customers who want a portable instrument that detects moisture, reports particle sizes and particle counts.

The most common contaminates found in fuel are particulates, water, other petroleum products or their residues and microbial growth(1,7,8). The main source of particle contamination is rust and scale(8); however, solids such as dust, pollen, rubber, fibers and microbial infestations can be found in fuel(1,2,6). Aside from the worst case scenarios, which are equipment downtime and human safety, fuel contamination can prove to be very costly as contaminated fuel will damage individual components within the fuel system. Some of these are noted below. 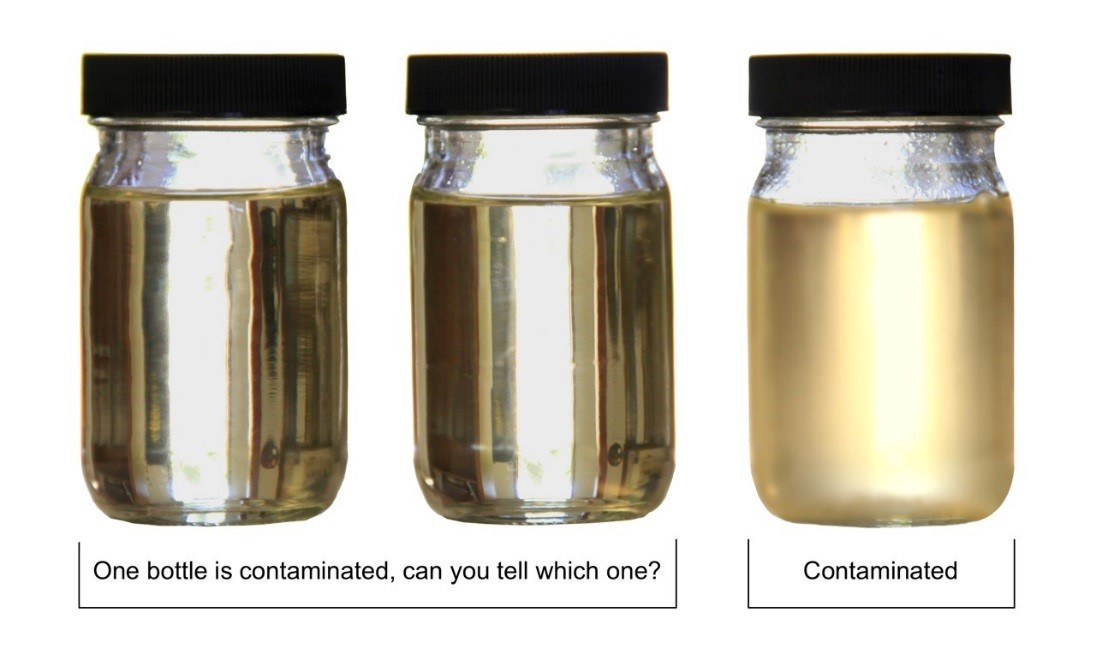 ASTM D4176 – 04(2009), also known as the “clear and bright” test, is the standard test method for free water and particulate contamination in distillate fuels(9). The standard procedure for checking contamination is to “hold the sample up to the light and visually examine for haze or lack of clarity(9)”.

The human eye is not capable of seeing particles smaller than ~40 μm, roughly the diameter of human hair or dust you see floating in a room when sunlight beams in. Ironically most fuel filter manufacturers sell filters that are rated below 40μm(5). It is very clear, pun intended, that there is a problem with this test method. If a human eyeball can only see down to 40μm and the fuel filter industry manufacturers filters rated below 40μm, doesn’t that prove that particles smaller than 40μm can create catastrophic damage to machinery and are not detectable with the human eye?

It seems with today’s advancements in technology and testing procedures we would have a more objective method for detecting fuel contamination.

With over 30 years of experience in optical engineering, Ken Girvin (Cheif Engineer at Beckman Coulter Life Sciences) and his team re-engineered the original HIAC PODS so fuels could be analyzed for water and particle contamination. This revolutionary breakthrough will play a key role in transitioning fuel testing from “subjective test methods” (human eye testing) to “objective test methods” (moisture detection & true particle counts). The New HIAC PODS+ is the first portable liquid particle counter that can scan fuels for water, count and size particles, and then automatically report results to international reporting standards. Oh and by the way, and it can do this in less than 60 seconds.

Reports are printed on the spot and backed up instantly, ready for export to computers or LIMS. Our Sample Recipe Wizard allows users to create custom test recipes, which can be stored and repeated. The instrument even runs cleaning routines and self-diagnoses—notifying the operator in case of sensor contamination, sensor blockage or a need for service.

In short, this rugged, portable, easy-to-use instrument is made for industrial
environments. Clean fuel, at the <40μm particle size will reduce the wear and tear and improve reliability on your equipment, components and filters. It will increase uptime and will drastically reduce costly repairs. 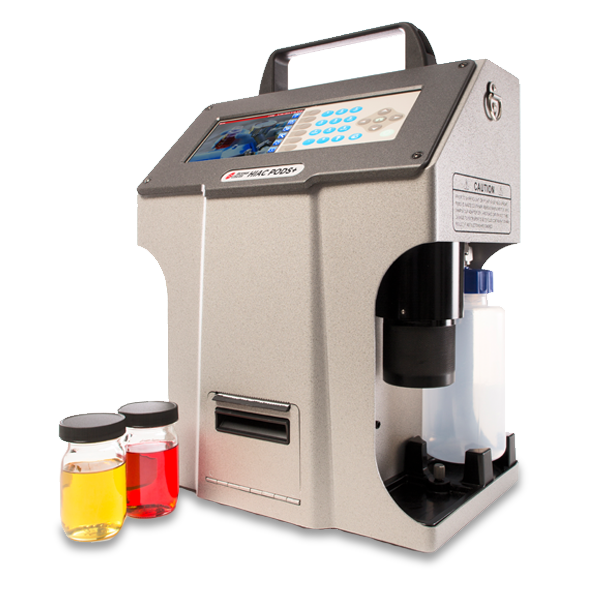