One approach to see the “something that is entangled with the lipid bilayer” called the exosome, is to look into fractionation based on density. Exosomes are essentially lipid sacks containing nucleic acid, protein and other materials, and because this lipid sack is light, it’s possible to fractionate based on density. For this reason, we use the ultracentrifuge.

There are other approaches in the market that collect exosomes using kits and reagents. Many of these kits do not disclose the isolation principle or the name of the reagent. I am apprehensive using these kits for exosome research. Because we are conducting research focused on subclassifying exosomes, we achieve purification using ultracentrifugation rather than kits. With ultracentrifugation, it is possible to fractionate exosomes both theoretically and comprehensively without missing any data.1, 2) 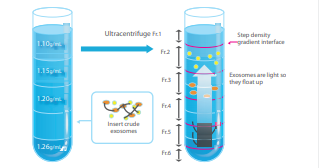 We do not consider everything that floats up to be exosomes; instead, we treat them as candidates. We conduct research to define exosome subclasses and non-exosomes among the candidates.

It has been confirmed that there are two classifications for exosomes based on density. There is speculation that the fraction with the lowest density includes a large lipid bilayer sack and an empty sack with almost no protein inside. A larger vesicle is also believed to exist, but it is eliminated in crude centrifugation. To observe large vesicles, it may be better to separate the reagent based on density before running centrifugation.

Subclassification of exosomes dramatically increases the amount of exosome data for diagnosis. Exosomes carry the parental cell data they secrete in "packages," and ideally these data are extracted at the single-particle level. However, this can be a challenging task. For this reason, even extracting data divided into subclasses would significantly increase the volume of data compared to the current bulk analysis that uses the average (Fig. 3). 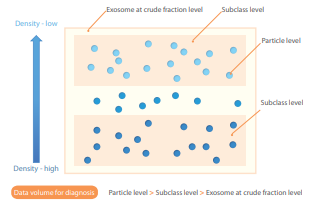 With density-based subclass analysis of exosomes in saliva, we aspire to put into practice non-invasive diagnostic methods for not only oral diseases, but also systemic diseases such as diabetes and osteoporosis. In the next section, we will describe the purification of exosomes in saliva, which is considered a challenging sample from which to collect exosomes due to the high viscosity