Relative centrifugal field (RCF) describes and compares the strength of the fields generated by different size rotors and different operating speeds. Just as length is measured in units of inches or millimeters, time in units of hours or minutes, the relative centrifugal field is measured in units also. It is expressed in multiples of the earth’s gravitational field, abbreviated g.

How to calculate the centrifugal field strength

There’s a simple formula for calculating the strength of a particular centrifugal field:

where r stands for the radius, which is the distance in millimeters (mm) from the center of rotation to some point within the rotor, and RPM is the speed of rotation in revolutions per minute (rpm). Sometimes radial distances are given in centimeters. Before using them in this equation, you must first convert them to millimeters (multiply by 10).

How to determine maximum RCF of a centrifuge rotor

To find the maximum RCF of a rotor, you need to know its maximum speed and its maximum radius (rmax), and the distance from the center of rotation to the bottom of the rotor cavity or bucket during centrifugation (see illustration below). Almost all centrifuge manufacturers publish this information for their rotors in their instruction manuals. 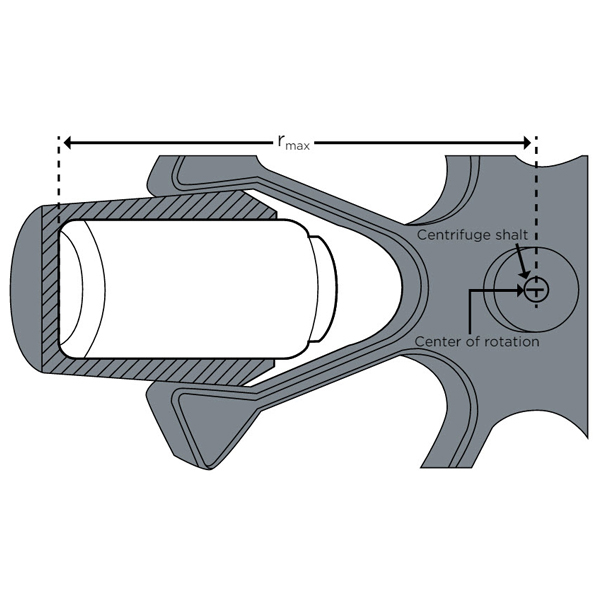 If this same rotor is run at a lower speed, say 2000 rpm, the RCF it generates will also be lower:

Since the RCF varies with the square of the rotor speed, you can see that any change in speed will cause a much greater change in RCF.