Measurement with Great Accuracy and Speed 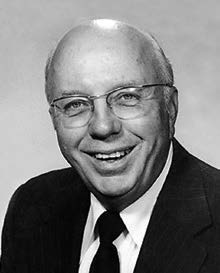 While under contract to the United States Navy in the late 1940s, Wallace H. Coulter developed a method for counting and sizing cells. The method was principally developed to count blood cells accurately and quickly. Its acceptance in the field of hematology is evident in that presently over 98% of automated cell counters incorporate the Coulter Principle. In the past fifty years, the method has also been utilized to characterize thousands of different biological and industrial materials. Bacteria, yeast cells, drugs, pigments, toners, foods, abrasives, explosives, clay, minerals, metals and many others have all been analyzed by the Coulter Principle. This method may be used to measure any particulate material that can be suspended in an electrolyte. The method is described in the International Standard ISO 13319 and is the subject of several ASTM standards. Over 7000 references to the uses of various COULTER COUNTER models have been documented.

How Cells are Sized and Counted

The Coulter Principle is based on the detection and measurement of changes in electrical resistance produced by a particle or cell suspended in a conductive liquid (diluent) traversing through a small aperture. When particles or cells are suspended in a conductive liquid, they function as discrete insulators. When a dilute suspension of particles is drawn through a small cylindrical aperture, the passage of each individual cell momentarily modulates the impedance of the electrical path between two submerged electrodes located on each side of the aperture, creating an electrical pulse. Figure 1 illustrates the passage of a cell through an aperture.

The number of electrical pulses indicates cell count, while the amplitude of the electrical pulse produced depends on the cell’s volume. The effective resistance between the electrodes is due to the resistance of the conductive liquid within the boundaries of the aperture. The presence of a cell within the aperture raises the resistance of the conductive plane by an amount that depends on the cell’s volume. Theoretical and practical analysis of the behavior of cells within an aperture shows that the height of the electrical pulse produced by the cell is the characteristic that most nearly exhibits proportional to the cell volume (Eckhoff 1967, Grover et al. 1972, Waterman et al. 1975, Kachel et al. 1976, Harfield et al. 1984). This method permits the selective counting of cells within very narrow size-distribution ranges by electronic selection of the pulses they generate.

The Coulter Principle Applied in the Multisizer 4e

The study of cell size distribution can yield much valuable information related to; the effect of drugs upon growth of tissue culture cells, the rate at which bacteria grow, how cell size changes with age, and many other biomedically relevant topics.

Cell volume changes during many biological processes, such as:

For example, proliferating cells in culture tend to double in volume before each division, but it is not known how growth and division rates are coordinated to ensure that cell size is maintained. The ability to measure cell volume changes can prove to be an important tool for understanding and controlling growth and cycles in cells.

Also, the maintenance of an adequate cell number requires a delicate balance between cell proliferation and cell death. This balance allows the optimal adaptation to changing functional needs. Cell death may be accomplished by at least two distinct mechanisms, necrosis and apoptosis. Necrosis is a pathophysiological mechanism involving cell swelling, disruption of the cell membrane with release of intracellular content. Apoptosis is a programmed cell death mechanism. Among the characteristics of apoptosis is cell shrinkage. Many disease models including cancer are hypothesized to be triggered by an imbalance and malfunction of the delicate pathways to balance cell proliferation and apoptosis.

In the following pages, several different cell size measurements are presented for a wide variety of cell types. Preparation notes regarding both buffers and dilution are provided to the reader alongside the size distribution curves. As these data show, The Coulter Principle offers the sensitivity, accuracy, and flexibility necessary for studying cell size distribution for a host of organisms with vastly different biological characteristics.

Figure 4. Example of Aspergillus in total cell count format. Note the high number of counts 1 µm and below is likely due to subcellular debris. 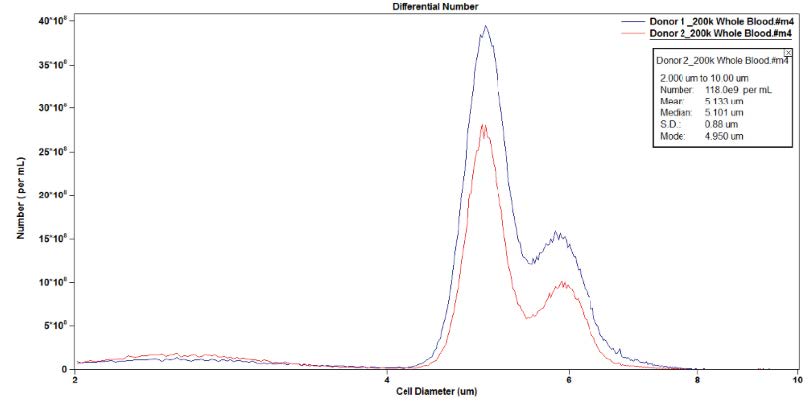 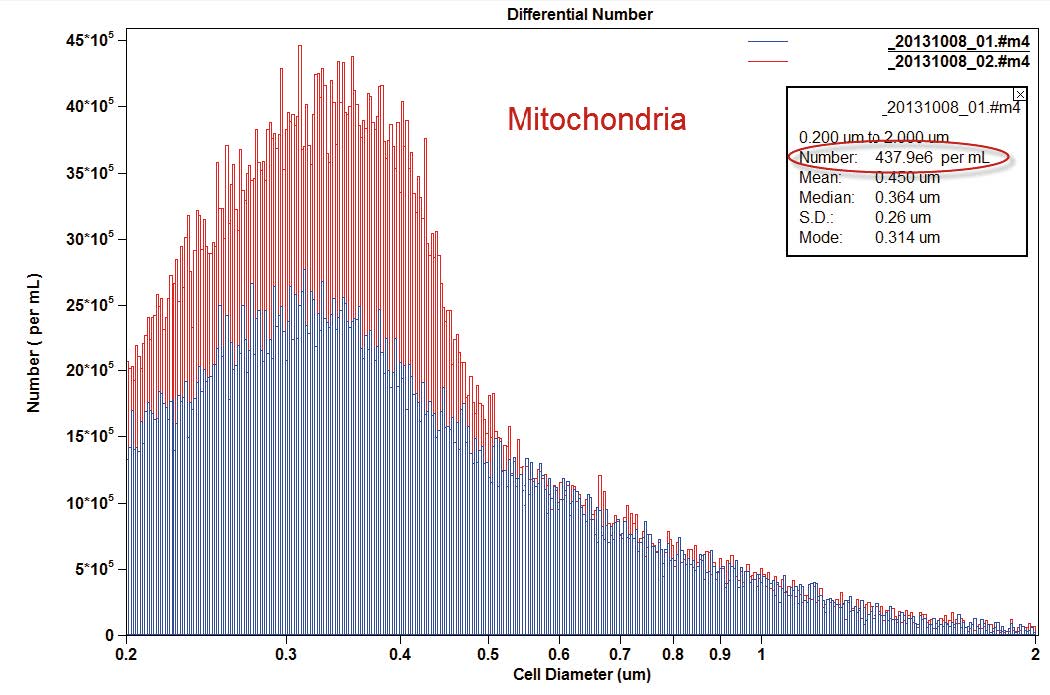 Figure 13. Example of CHO Cell Line. Note the similar cell volume to the U937 line shown above, but with distinct defining differences. 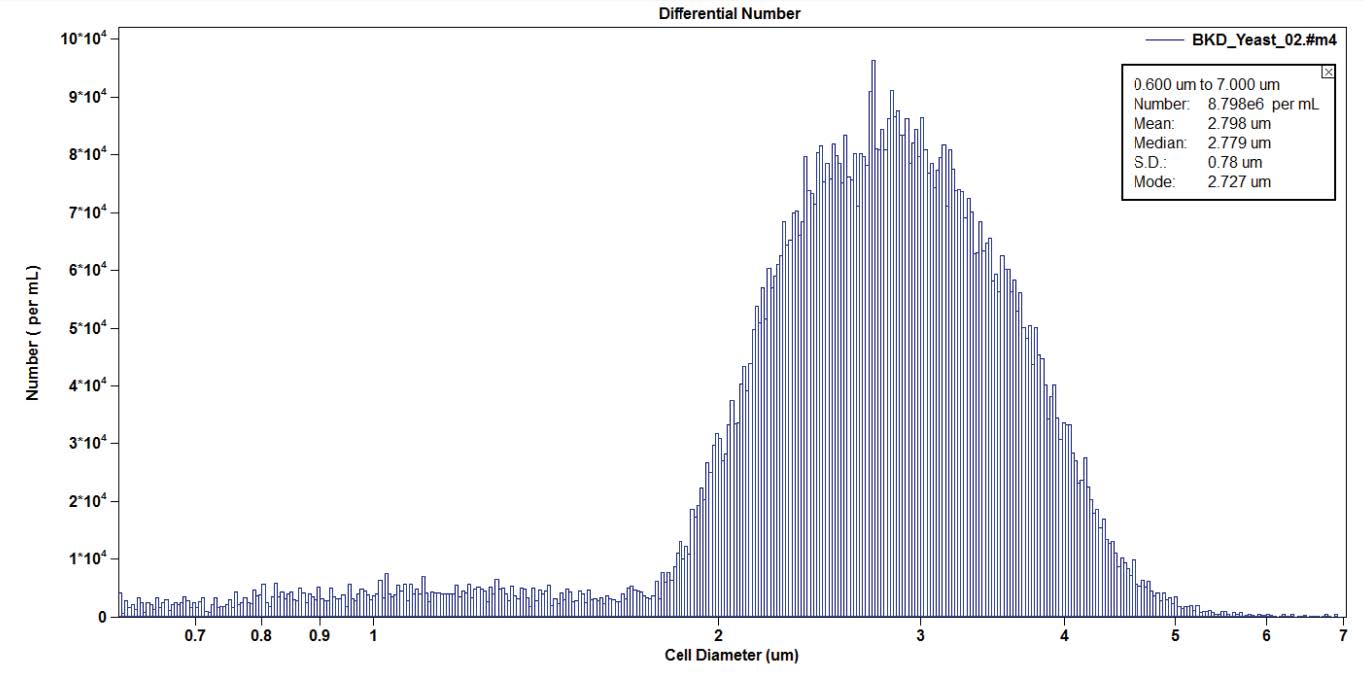 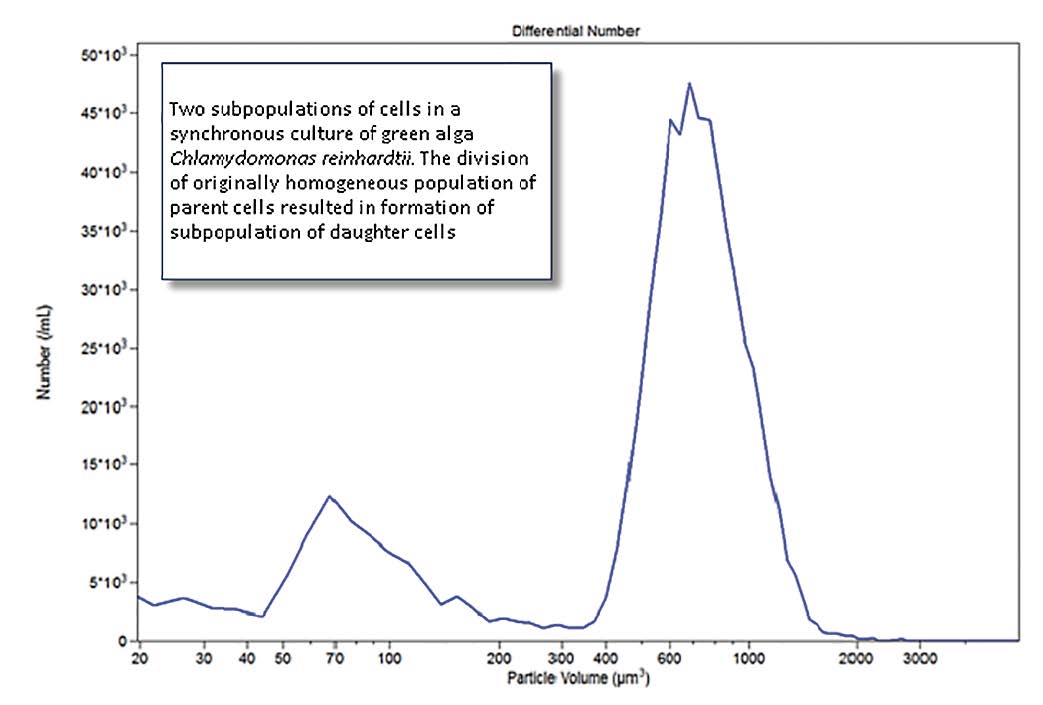 Figure 16. Two subpopulations of cells in a synchronous culture of green alga.

Verification of Triploid or Diploid Fish

The mean erythrocyte cell volume, nuclear volume, linear measurements, and DNA content of triploid fish were 1.2 to 1.8X greater than measures of diploid fish with little overlap between the measures. Measuring mean nuclear volume using a Coulter counter provides a rapid and accurate method of discriminating diploid from triploid fish. 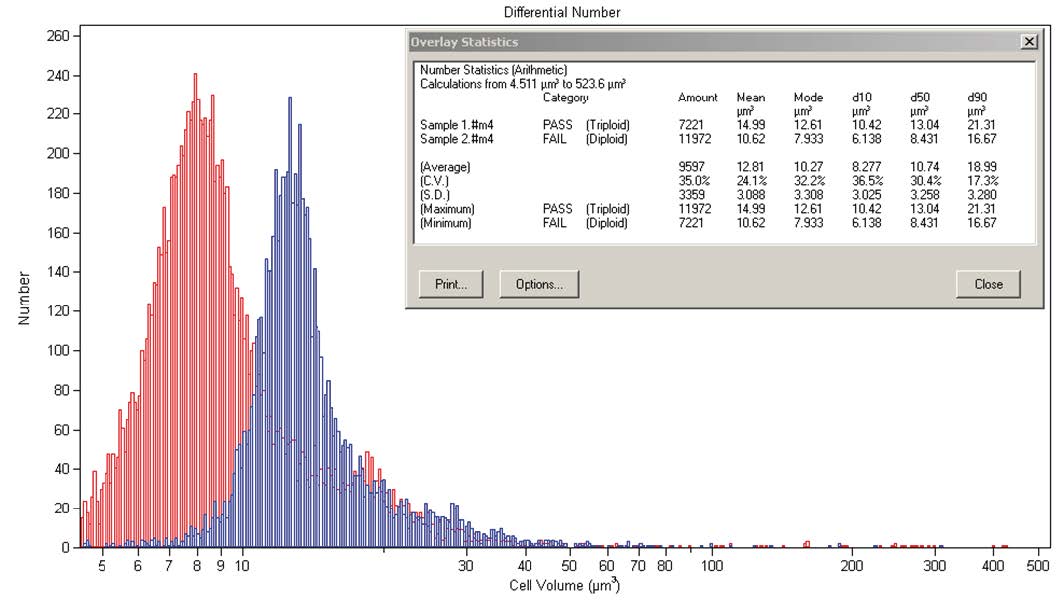 Figure 17. Two subpopulations of cells in a synchronous culture of green alga.

Figure 18. Example of cell population differences in human versus porcine cardiospheres. Note the large aggregate peaks between 200 and 300 µm.

To ensure accurate and precise measurements there are a few best practices to follow. In this section we describe the key areas to take into consideration in planning your experiments.

Use the Appropriate Size Aperture

If the cell population is heterogeneous and thus covers a wider range than a single aperture can measure, two or more apertures are recommended with the test results overlapped to provide a complete cell size distribution analysis.

A factor to consider when using smaller apertures is that they are more prone to blockage due to debris in the sample suspension or agglomeration of the sample itself. With COULTER COUNTER instruments, the aperture is monitored so that any blockage to the aperture is easily evident. Blockages are normally easily cleared by means of momentary backpressure to the aperture or by using a soft brush. In cases where the above means do not remove the blockage, the aperture tube can be removed from the system and cleared by means of soaking in acid or application of greater backpressure. When using small apertures, special care has to be taken with high current because it can damage the aperture.

Use the Appropriate Electrolyte

Several considerations come into play when selecting the electrolyte in which the particles are to be suspended. The solution should be chemically compatible with the sample material and should allow for proper sample dispersion. Frequently treatment with surfactants and ultrasonication may be necessary. The solution must also be essentially free of particles within the range of particles to be measured. The electrolyte solution is commonly filtered using 0.22 or 0.45 μm membrane filters.

Electrically the solution should have similar characteristics as 0.2-20% w/v sodium chloride in water. The aperture resistance measured in the solution should be between 1 and 100 kΩ, ideally around 5-40 kΩ. As the Coulter Principle was initially used for counting blood cells, the electrolyte most often used is normal Saline (0.9 g NaCl / 100 ml H2 O). Beckman Coulter Isoton II diluent is a filtered, phosphate-buffered saline solution compatible with human blood cells, and is highly recommended to be used for suspension of most biological cells and many industrial samples.

As has been stated before, the Coulter Principle can be used to count and size any cells or particles that can be suspended in an electrolyte. In order to suspend some large particles, it may be necessary to add a thickening agent such as glycerol or sucrose to raise the viscosity of the solution. A thickening agent will also help reduce the noise generated by the turbulent flow of low viscosity electrolyte as they pass through large diameter apertures (d ≥ 560 µm). Even with maximum stirring and with thickening agents, large particles may not stay in suspension uniformly enough to enable a representative sample to be counted with reproducible results. It is because of the issue of particle suspension that round-bottom beakers have virtually replaced flat-bottom beakers as the vessel of choice with the Coulter Principle. A round-bottom beaker allows for a more uniform dispersion of particles throughout the suspension resulting in more consistent measurements.

When working with small apertures, it is necessary to pre-filter de-ionized water and/or Isoton II used to fill, flush, or clean the system and accessories. Filter the Isoton II or diluent solution with a compatible 0.2-μm filter. A 0.1-μm filter can also be used in series with a 0.2-μm filter for additional filtering. Contact a filtration supplier to determine the appropriate filtration components for your application.

The COULTER COUNTER provides two basic measurements, cell count and cell volume. The cell count requires no calibration. The principle yields cell counts that can be regarded as accurate, subject to coincidence correction. However, the cell size response must be calibrated.

Calibration is performed using standard materials, such as a polymer latex sample. NIST traceable calibration standards can be obtained from Beckman Coulter Inc.. These are narrow-size-ranged latex samples whose size has been precisely measured by another method and they are standardized for the mode value. The material is measured and the mode of the generated size distribution is related to the assayed value of that latex.

Use the appropriate sample concentration

In order to achieve maximum measurement precision, there are two potentially competing factors that must be considered. First, the total number of particles counted must be sufficiently high and second, the concentration of particles must be such that coincidence limitations are not exceeded. Coincidence occurs when the passage of more than one particle or cell moves through the sensing zone at the same time. In other words, ideal counting conditions exist with large measurement volumes of low particle concentration. Generally these conditions are not found in an undiluted sample. It is, however, important that any particle counter/sizer should measure a large number of particles in order to achieve the greatest statistical confidence in the result. When it is not possible to accumulate a large number of counts i.e. under 100 cells, it is advisable to run the analysis in triplicate and use the mean value obtained from the three runs.

Whether your cells are bacteria, animal cells or plankton it is clear that the Coulter Principle is one of the most universal and adaptable techniques for studying cell size or simply counting cells. It has been a stable and proven technology since it was developed in the late 1940’s.