When considering which instrument is appropriate for a given application, it is common to consider various performance characteristics. Regulatory guidance documents provide carefully prescribed directions on how to determine these figures of merit. For Detection Limit (DL), often referred to as Limit of Detection (LOD), both ICH and JP 16 offer clear direction.

And S = the slope of the calibration curve

“The lowest amount or concentration of the analyte in a sample that is detectable, but not necessarily quantifiable”.

Unlike ICH, which allows three approaches, JP specifies only one approach to determine the DL:
Detection Limit = 3.3σ / slope

Following the JP 16 approach, the QbD1200 Detection Limit is calculated from a combination of the slope of the calibration curve and the standard deviation observed during multiple measurements of blank water. 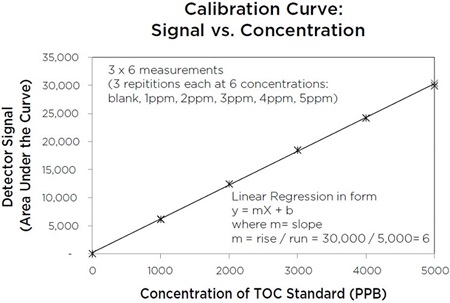