A scheduled system update will be performed from 6 PM PST to 9 PM PST Saturday, May 28th. During this timeframe, customers will not be able to place orders online. Please contact lsecommerce@beckman.com for assistance. We appreciate your patience while we continue to improve the online experience at beckman.com.

While under contract to the United States Navy in the late 1940s, Wallace H. Coulter developed a technology for counting and sizing particles using impedance measurements. The technology was principally developed to count blood cells quickly by measuring the changes in electrical conductance as cells suspended in a conductive fluid passed through a small orifice. Presently, over 98% of automated cell counters incorporate this technology, which is referred to as the Coulter Principle. In the past seventy-five years, the technology has also been used to characterize thousands of different industrial particulate materials. 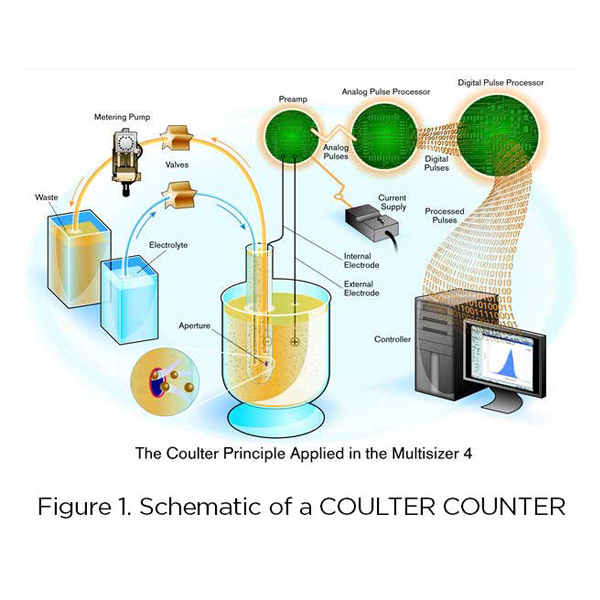 Beckman Coulter instrument systems which utilize this principle are called COULTER COUNTER instruments. Drugs, pigments, fillers, toners, foods, abrasives, explosives, clay, minerals, construction materials, coating materials, metals, filter materials, and many other sample types have all been analyzed using the Coulter Principle. This method can be used to measure any particulate material that can be suspended in an electrolyte solution. Particles as small as 0.4 µm and as large as 1600 µm in diameter can routinely be measured. Over 8,000 references to the uses of this technology have been documented.

In a COULTER COUNTER instrument, a tube with a small aperture on the wall is immersed into a beaker that contains particles suspended in a low-concentration electrolyte. Two electrodes, one inside the aperture tube and one outside the tube but inside the beaker, are placed and a current path is provided by the electrolyte when an electric field is applied (Figure 1). The impedance between the electrodes is then measured. The aperture creates what is called a "sensing zone". Particles in low concentration, suspended in the electrolyte, can be counted by passing them through the aperture. As a particle passes through the aperture, a volume of electrolyte equivalent to the immersed volume of the particle is displaced from the sensing zone. This causes a short-term change in the impedance across the aperture. This change can be measured as a voltage pulse or a current pulse. The pulse height is proportional to the volume of the sensed particle. If constant particle density is assumed, the pulse height is also proportional to the particle mass. This technology is also referred to as aperture technology.

Using count- and pulse-height analyzer circuits, the number and volume of each particle passing through the aperture can be measured. If the volume of liquid passing through the aperture can be precisely controlled and measured, the sample concentration can also be determined. In modern COULTER COUNTER instruments, such as the Multisizer™ 3 and 4, particle counter and sizing instruments, pulses are digitized and saved with several key parameters that describe each pulse such as pulse height, pulse width, time stamp, pulse area, etc. These parameters enable the instrument to better discriminate between noise and real pulses as well as between normal and distorted pulses due to various reasons when particles pass through the aperture. Saved pulses can be used to monitor sample changes over the measurement time period should pulses be arranged in time sequence. In practice, particle volume is often represented in terms of equivalent spherical diameter. The measured particle volume (or size) can be then used to obtain particle size distribution.

With counting and sizing rates of up to 10,000 particles per second, it takes less than one minute to perform a typical measurement with a COULTER COUNTER instrument. The accuracy of size measurements can be better than 1%. Aperture size typically ranges from 20-2000 µm. Each aperture can be used to measure particles within a size range of 2 to 80% of nominal diameter. Therefore, an overall particle size-range of 0.4-1600 µm is feasible. However, the ability of the technology to analyze particles is limited to those particles that can be suitably suspended in an electrolyte solution. The upper limit therefore may be 500 µm for sand but only 75 µm for tungsten carbide particles. Moreover, the lower size limit is restricted by electronic noise generated mainly within the aperture itself. The selection of the most suitable aperture size is dependent upon the particles to be measured. If the sample to be measured is composed of particles largely within a 30:1 diameter size range, the most suitable aperture can be chosen. For example, a 30 µm aperture can measure particles from about 0.6 to 18 µm in diameter. A 140 µm aperture can measure particles from about 2.8 to 84 µm. If the particles to be measured cover a wider range than a single aperture can measure, two or more apertures must be used and the test results can be overlapped to provide a complete particle size distribution.

During the Coulter Principle measurement, as a particle passes through the sensing zone when the liquid is drawn from the container, a volume of the electrolyte equivalent to the immersed volume of the particle is displaced from the sensing zone. This causes a short-term change in the resistance across the aperture. This resistance change can be measured either as a voltage or current pulse. By measuring the number of pulses and their amplitudes, one can obtain information about the number of particles and the volume of each individual particle.

The number of pulses detected during measurement is the number of particles measured, and the amplitude of the pulse is proportional to the volume of the particle. Because this is a single-particle measurement process, it yields the highest resolution that any particle characterization technique can achieve. The particle diameter can be determined at the resolution of voltage or current measurement which can be very accurately using current electronics technology. The distribution amplitude can be determined to the accuracy of a single particle.

Other advantages include fine differential between two particles and more accurate statistic values calculated from the distribution. The figures below show a sample measured using the Beckman Coulter Multisizer 4 and displayed in different size ranges. The pulse data was resorted into a finer set of bins in the right figure in which more detail of the distribution is displayed.

In Coulter Principle instrumentation, the change in electric resistance due to passages of particles through the aperture is determined using fast electronic circuitry. Detected signals are instantaneously digitized at a rate of a few-million times per second into digital signals. The digital signal is then recorded for every pulse in the form of pulse parameters (i.e., timing, height, width of pulses, etc.). As most measurements seek to obtain particle counting or size distribution, the recorded pulse height is converted to particle size using the calibration constant and placed into one of the pre-set size bins. Particle size distribution and counting are the cumulative result of all pulses measured. All recorded pulse parameters are still available for purposes other than standard, full-range particle size distribution. These parameters can be subtracted or sorted (i.e., reprocessed differently based on specific applications). For example, if an operator seeks to have a zoom-in size distribution showing every detail of the distribution, then a narrower size range can be selected and all pulses can be sorted and placed into the new set of finer bins. Another example is found when pulse heights (or sizes) are sorted in a time sequence (for samples of narrow size-distribution) t monitor sample change during measurement. Still another example is using one plot pulse height as a function of pulse width to find information of particle shape.

As a particle passes through the aperture, it creates a resistance. The bigger the particle, the more the resistance, the greater the voltage. Each voltage spike is directly proportional to the size of the cell. Today every modern hematology analyzer depends in some way on the Coulter Principle. 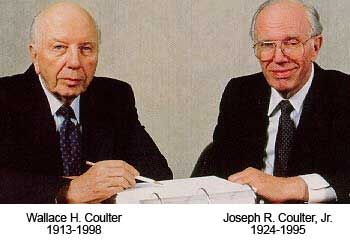 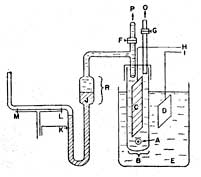 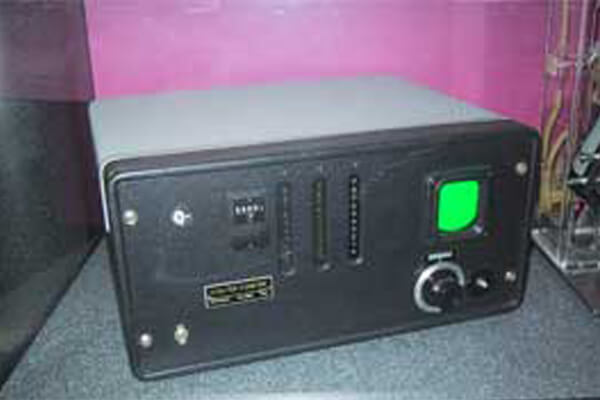 The first commercial version of the Coulter Counter 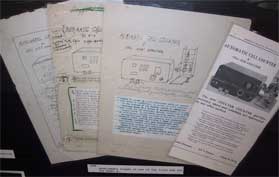 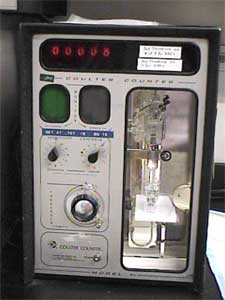 A method was devised for using the model F Coulter Counter for counting goat erythrocytes, which are smaller and more numerous than those of humans. Blood samples were taken from 25 goats, and the cells were counted using 100- and 70-micron aperature tubes. A visual count also was made of a portion of each sample. The results were analyzed statistically to determine which aperture would produce the most accurate and reproducible results when compared with the manual counts. It was found that counts obtained with the 100-micron aperature tube were not significantly different from the manual counts.

This technology found commercial success in the medical industry where it revolutionized the science of hematology. Red blood cells, white blood cells and platelets make up the majority of the formed elements in the blood. When whole anticoagulated human blood is diluted with isotonic saline, the Coulter principle can be applied to count and size the various cells that make up whole blood. The first commercial application of the Coulter principle to hematology came in 1954 with the release of the Coulter Counter Model A (developed by Wallace and brother Joseph R. Coulter.

Within a decade, literally every hospital laboratory in the United States had Coulter Counter, and today every modern hematology analyzer depends in some way on the Coulter Principle.

Explore Different Instruments within Our Portfolio

We offer a wide variety of instruments for total optimization of your laboratory. Our focus on innovation, reliability and efficiency has led us to become the partner of choice for clinical, research and industrial customers around the globe.

We offer research and clinical models that take the best of legacy flow cytometers and set a new standard for more compact, more versatile and more powerful instruments.

A variety of configurations allows you to optimize performance and reduce hands-on time for most genomic, drug discovery and basic research application workflows.

The COULTER COUNTER Analyzers provide size distribution in number, volume and surface area in one measurement, with an overall sizing range of 0.4 µm to 1600 µm.